“I don’t think that humans will be completely erased from insurance jobs” Interview with Robbie Bouschery MD of Pirate.global conferences

It seems, that within no time you have established one of the most exciting and successful event series in Germany – the Pirate Summit, Exec and RIOT. Tell more about it. Why should one join?

At our events we’ve always put quality of attendees above the quantity. I think this was the key to our success. When people come to our events they know that the other people they will meet there will be worth their time in some form – as a potential partner, investor, hire or just to have a good conversation. Additionally by setting a few rules we try to make it as easy as possible for our attendees to connect and make meaningful connections. The first rule for example is to use the first name only and even though it’s such a simple one it has a big difference on breaking down artificial barriers that are in the way of networking.

Mostly as a chance. Digital technologies enable many great things that weren’t thinkable just years or sometimes even months ago across all industries. I see myself as a techno-optimist and believe that if handled right, further digitalization will make the world more livable for all people. Of course not everything always just has positive consequences and there are also threats that arise because of this transformation – think of the recent hacking or malware attacks. So I think it’s important to have honest and open discussions about new technologies and how we should deal with them as companies or also as a society. Anyone should be open to truly assess the possible positive impacts of technologies on their business and not just be careful or say no out of principle.

Herbert Fromme, maybe Germany’s most famous journalist on Insurance topics, said a few weeks ago, that insures can reduce the majority of the tasks in the future and for the rest they need employees with different skillset. What are your thoughts here?

I agree – I think that there are many jobs that will be replaced with „machines“ in the near future in the insurance industry. Especially in sales, claims management or general customer support where today there are still a lot of humans doing fairly trivial tasks but also in more complex jobs like those of actuaries, we’ll probably see this trend approaching sooner than some think right now. Because most of these jobs will be replaced by new digital technologies, the insurers will need lots of new skilled workers in technical positions and managers capable of overseeing big IT projects. However I don’t think that humans will be completely erased from insurance jobs probably ever. Even if machines could do some jobs just as good or better in less time, there will also be demand for personal interactions in some cases.

In conversation behind closed doors I hear a lot traditional c-suits say, that it’s just not in the DNA of their industry to take risks and invest heavily in possibly disruptive technologies and business models. Do traditional companies have to take more risks nowadays and how can they overcome cultural barriers?

I can understand a culture of risk-aversion in the insurance industry and to be fair, I’m happy it is that way on many levels. In the end, what these companies are handling are masses of what is theoretically „other people’s money“. As a customer you don’t want insurers to gamble with the money that is supposed to be available to cover your claims costs just for the sake of being more innovative. Most insurances actually are very good at handling risk because that’s their bread & butter. What I do think needs to change is the perception of the risk that new players and the changing landscape around technology actually pose to their core business model. I sometimes have the feeling that they still don’t take insurtech startups seriously and I think that could be a similar mistake to the one big retail firms did for years with regards to ignoring Amazon. To have a more open culture towards these topics, insurers need to hire people that understand the digital and startup industry not just as external experts but people that have shaped the industry in the past. Additionally I think it’s critical not just to put these new hires into „labs“ and other offshoot branches of the company but actually hire them into the core businesses and let them influence the way the current staff thinks and works. This is not easy and won’t be in the future, but I think it will be crucial for the big companies to adapt authentically.

What are your Top 5 advice for actions for an traditional c-suite, that understands that he or she needs to act soon and to start-up founders?

I don’t have a top 5, but my main advice would be:

To the traditional C-Suite: Don’t treat the new players as exotics and look down on them but take them seriously and talk to them on eye-level. Rather than try to fight them, try to embrace the change and use it as momentum for your own innovation.

On the flipside to startup founders: Don’t be too cocky and aggressive with regards to the big insurers. You have to respect the way a large insurance works and the history of how it got there. The insurance industry is not one you will be able to disrupt fast but one where you’ll need to be willing to be in it for the long run.

Here a few personal questions: What are your most favorite books?

In non-fiction, my two favorite books are probably „The Innovators“ – by Walter Isaacson, which is a fascinating combination of history lessons around the invention of digital technologies mixed with many mini-biographies and how different people have influenced each other to achieve greatness & „Delivering Happiness“ by Tony Hsieh which is one of the most enjoyable books on company culture I’ve read.

In fiction it’s „The truth about the Harry Quebert Affair“ by Joël Dicker – a thrilling debut by a young author and „Breaking News“ by Frank Schätzing, which although sometimes stressful to read because of its style, combines an exciting fictitious storyline with a deep factual look into middle-eastern conflicts.

Which books are must-reads for anybody working in the insurance industry and insurtech ecosystem or working on the digital transformation of a traditional company?

I would recommend the before-mentioned „Delivering Happiness“ by Tony Hsieh because it teaches valuable lessons on creating a healthy culture as well as how important it is to take the customer’s perspective, and „The Everything Store“ by Brad Stone, which tells the story of Amazon and its founder Jeff Bezos.

What are your most favorite books?

In non-fiction, my two favorite books are probably „The Innovators“ – by Walter Isaacson, which is a fascinating combination of history lessons around the invention of digital technologies mixed with many mini-biographies and how different people have influenced each other to achieve greatness. (Here a link to The Innovators in English, German, Spanish or French.)

In fiction it’s „The truth about the Harry Quebert Affair“ by Joël Dicker – a thrilling debut by a young author and „Breaking News“ by Frank Schätzing, which although sometimes stressful to read because of its style, combines an exciting fictitious storyline with a deep factual look into middle-eastern conflicts. (Here a link to The truth about Harry Quebert Affair in English, German, Spanish and French. Here a link to Breaking News in German, Spanish and French.)

Do you have any tech gadgets that make your day-to-day life easier or more fun?

I love gadgets so I typically have many of them (and many cables) with me. Ever since I got the Apple AirPods, I wouldn’t want to spend a day without them, even though I thought they were a joke first. They’re my ideal headphones for phone calls but what I really love is that I can use them to go running and forget that I’m wearing headphones after a minute. (Here link to Apple AirPods to Amazon in the US, Germany, France and Spain)

For better sound when listening to music and to make flights and train rides more comfortable I also usually pack my Bose noise canceling headphones. In addition, I also always carry my Kindle with me to read whenever I want to get my mind off work a bit. (Here link to Bose noise canceling head phone to Amazon in the US, Germany, France and Spain)

Biography on you:
Robbie Bouschery is the Managing Director of PIRATE.global, an event startup that organizes some of Europe’s best known tech conferences. He spends his week between Cologne, Berlin and Tübingen and also frequently the US where he grew up as a child. If you want to find him off work, you can always challenge him to a squash or badminton match, to go running or to have a discussion about life & the universe while enjoying an espresso or a beer. 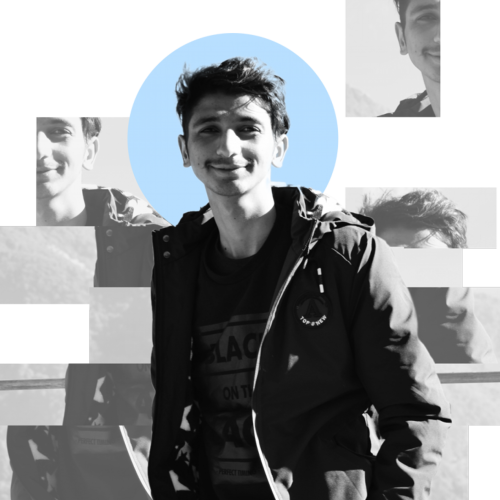 How CEOs Should View and Approve Social Media Strategies

“Digital Transformation is not a choice anymore” Interview with Dorota Zimnoch, Founder and Influencer